The world of skydiving near Berlin

TAKE OFF is a professional skydiving school with full-time tandem pilots, skydiving instructors and parachute technicians, state-of-the-art equipment and certainly one of the best infrastructures available in Germany for a skydiving centre.

At TAKE OFF, everything revolves around freefall. As the only skydiving centre in Germany, TAKE OFF offers all areas of skydiving. This includes tandem jumps, parachute courses, sport jumping, parachute trade and maintenance, as well as the production of parachute sportswear (via rainbow Design).

Sorry, only in German Language.

Skydiving is our passion - for 25 years

With up to 20,000 jumps per year, TAKE OFF is one of the five largest skydiving companies in Germany. This includes approx. 3,000 tandem jumps per year and approx. 150 course participants for first-time skydivers.

Our partners, instructors and tandem pilots have very high jump numbers, usually ranging from 2,000 to over 10,000 jumps. Some of them are regular participants in international world record jumps in formation and canopy formation jumping. They therefore enjoy a very good reputation as experts within the sport of skydiving.

Skydiving for beginners and professionals

In addition to the daily skydiving operations, TAKE OFF runs additional services in the field of skydiving equipment and maintenance.

The TAKE OFF company history

Our history at a glance

Foundation of TAKE OFF Skydiving as a sole proprietorship

713 jumps in the first year

Foundation of TAKE OFF Fallschirmsport GmbH

Purchase of the manufacturer of skydiving clothing rainbow Design

Licensing as a parachute technical company

New turbine for our FUMP with a powerful 900 hp 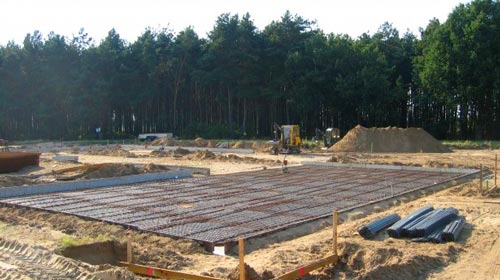 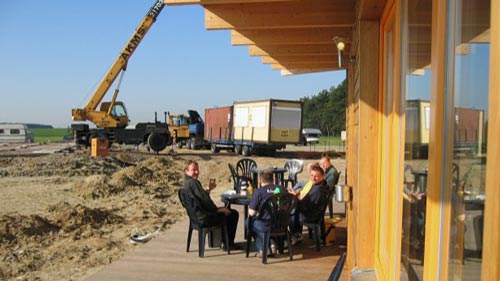 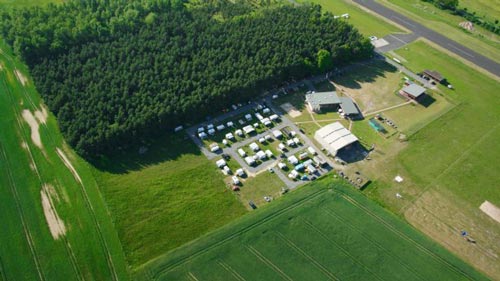 TAKE OFF Fallschirmsport was founded in 1992 as a sole proprietorship and consisted of 1 full-time instructor (the owner), 1-2 freelancers, approx. 5 parachutes, a caravan - and, due to the lack of an existing telephone line, a "mobile" C-network telephone weighing approx. 3 kg - and off we went.

At that time, the airfield consisted of a narrow, short runway made of concrete slabs and two caravans - the left caravan was the flight school and tower - the right caravan was the parachute school. We jumped out of an old AN2 - the world's largest biplane with a huge 9-cylinder radial engine, 1,000 hp and 30 litres capacity. It took us a good half hour to reach 2,500 metres, with a roar that felt like it reached all the way to the national border. We achieved a total of 713 jumps in the first year. Today, this is often the number of a single week.

Expanding the infrastructure & increasing the number of jumps

The next important step was the chartering of a Pilatus Porter, a modern turboprop aircraft for up to 10 jumpers. Now they could finally reach the world's standard sport jumping altitude of 4,000 metres in just 18 minutes. In addition, a container facility for the schools' offices, a tower, catering facilities and, instead of green plastic containers at the roadside, proper toilets and showers were now built on the airfield - a previously unknown luxury. The number of jumps promptly increased from 713 in the first year to 6,200 in the second and 9,300 in the third year.

Foundation of TAKE OFF Fallschirmsport GmbH 1995

In the winter of 94/95, the owner Ralf Heine and the three previous employees Maggy Nagel, Jürgen Mühling and Uwe Reichert joined forces to form TAKE OFF Fallschirmsport GmbH. At the same time, at the beginning of 1995, the GmbH acquired rainbow Design, a ready-made parachute company specialising in the parachute sports sector, and moved it from West Germany to another container facility at the Fehrbellin airfield.

Approval as a technical parachute company

After approval as a technical parachute company at the beginning of 1996, two parachute technicians/class 5 examiners were employed and trained.

From 1992 to the end of 1998, aircraft from other owners were chartered to carry out the jumping operations. At the beginning of 1999, the GmbH finally invested in its own modern turbo-prop aircraft for 18 passengers (Cessna Grand Caravan C 208B / 1.2 million EUR / registration number D-FUMP). In this context, the small aviation company Air Lift GmbH was acquired to operate the aircraft.

We are bursting at the seams

At the time, the container house was only intended as a provisional solution. But as it is with provisional arrangements. TAKE OFF continued to grow, and the number of guests at the airfield also increased steadily. The rainbow Design clothing company was also doing well and had in the meantime moved to the Fehrbellin industrial estate in order to be able to work properly. Slowly, the hut threatened to literally collapse on us. Something for which the one or other party was certainly not blameless. The increasingly less discreet notices from the building authorities also made it clear: it was really time for a new building of our own!

More space and a new building

The airfield itself was also no longer able to cope with the significant growth in flight operations, with over 11,000 landings in some cases, with its makeshift runway geared only to agricultural flights. And so it was time to get down to business: a clean commercial airfield with a good infrastructure for business and sports flying was needed. Part of the airfield concept was to sell land to interested companies so that they could then erect their own buildings there.

After completely rebuilding the airfield and demolishing the old buildings, TAKE OFF invested in its own new infrastructure in 2005. On 10,000 m² acquired from the airfield, a service building for the guests' stay, administration, workshops and sanitary facilities (541 m²), a hangar for training purposes, for packing parachutes and storing our aircraft (467 m²) and a camping site with 36 pitches were built. About 950,000 EUR were invested.

In 2004 the production of special clothing was spun off from TAKE OFF Skydiving and merged into rainbow Design as an independent limited company.

New turbine for our FUMP aircraft

New tandem centre in 2016 & purchase of the "airbase" bistro

In 2016, our focus was on expansion and extension. There is now a packing area for our tandem jumpers. In this new tandem centre there is enough space for the briefing and dressing of our tandem guests. Furthermore, we have extended the workshop area and we have bought the bistro "airbase", which is located directly on the premises. So we can now offer our visitors delicious food.

We also exist as a registered club. Our licensed skydivers love and live a lively club life with competitions and of course the odd party. More about TAKE OFF Fallschirmsport e.V.

The TAKE OFF partners 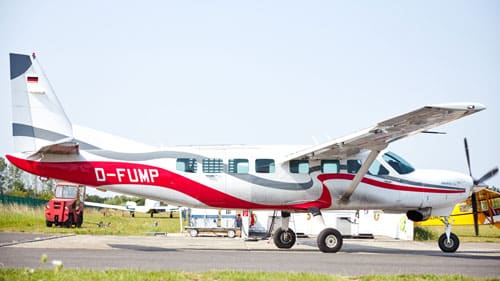 Air Lift GmbH, which also belongs to TAKE OFF, is the operating company of the in-house aircraft - the 18-seater Cessna Grand Caravan D-FUMP. The small company was acquired by TAKE OFF in 1999 to ensure professional flight operations for skydiving. 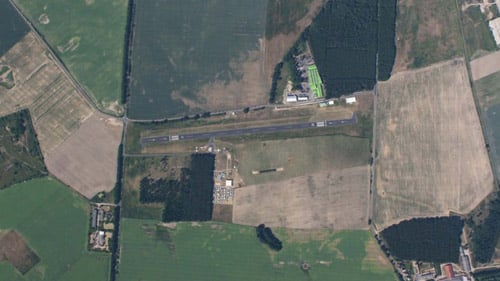 TAKE OFF is located on a small sports airfield in Fehrbellin in the Ruppiner Land. Since 2002, the area has been expanded piece by piece with an asphalted runway, a tower, various aircraft hangars, gastronomy, a flight school, a parachute school and a ready-made clothing business. 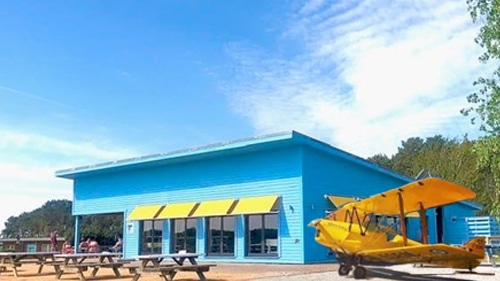 At the airfield, Eric's restaurant will also cater for the physical well-being. Drinks and all kinds of tasty treats await skydiving guests and spectators.

A skydiving centre can be as beautiful as it is - without a strong team it is nothing. It's a bit unbelievable, but in order to keep our jumping centre running with all its services and necessities throughout the year, it takes a team of almost 60 people.

They range from full-time employees with many years of service, seasonal full-time teachers and tandem pilots to part-time parachute packers.

Our team is cosmopolitan and has been to many dropzones world wide. Of course, we have English as a general foreign language in our portfolio for our foreign guests and all those who wish to speak so.

Explanations of the areas of responsibility

Parachute Technician - has the licence to repair and maintain parachute systems 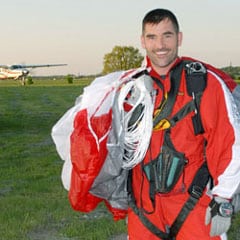 Managing Director, Training Manager, Shareholder Jürgen Mühling - nicknamed "Mahle" - is the jump operations manager of TAKE OFF, a member of the Federal Parachuting Commission as well as the DFV's "Training" working group. 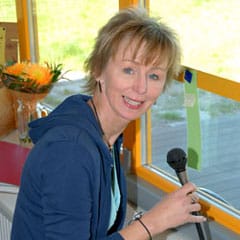 Managing Director, Partner Maggy is the manager of our skydiving centre and the perfect contact person when it comes to skydiving matters. 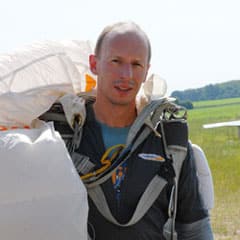 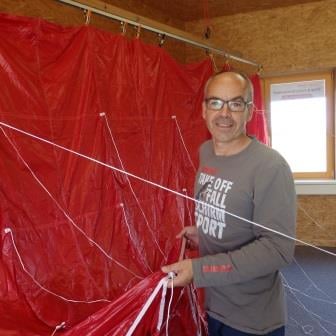 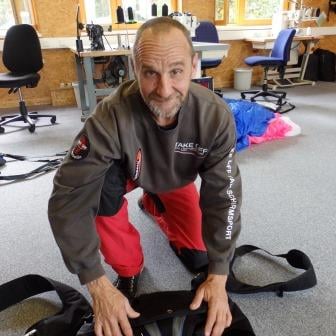 Parachute technology, parachute trade Olaf - nicknamed "Flirre" - is a passionate instructor, which means he teaches others how to skydive. He also deals with proper parachute maintenance. Phone: 033932 – 72462 E-Mail: flirre@funjump.de 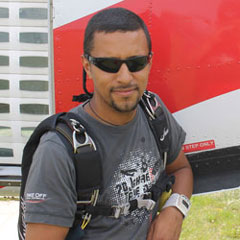 Tandem Pilot, Chief Instructor John - nicknamed "Johnboy" - is an AFF instructor, which means he teaches skydiving according to the AFF method. He is also a tandem pilot and one of our video men. 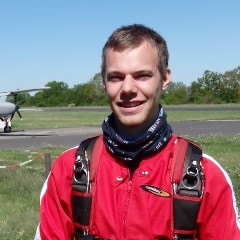 Tandem pilot, instructor Kai is a tandem pilot, skydiving instructor and AFF instructor. He guides tandem guests through their tandem jump experience and teaches others how to skydive. 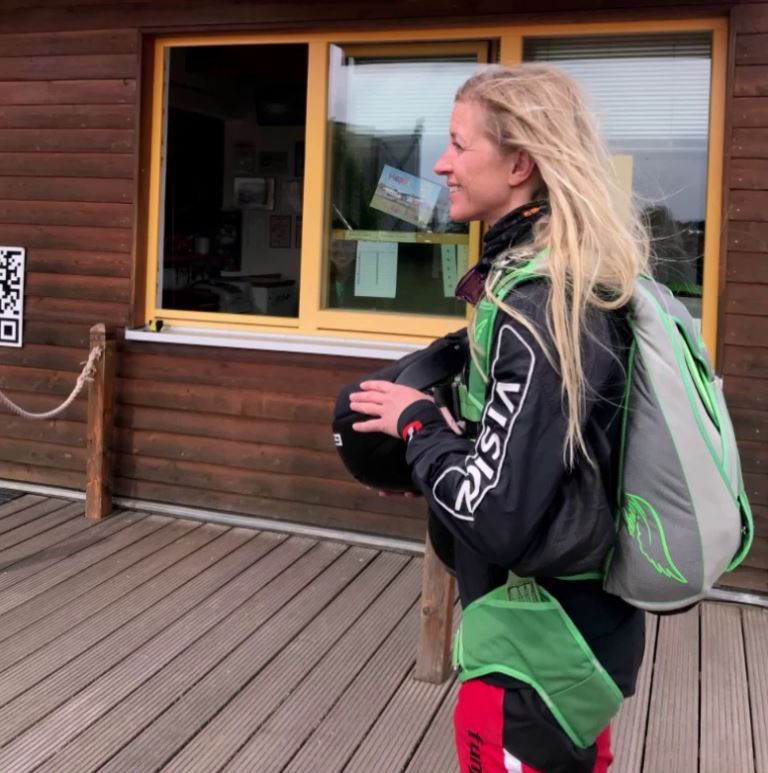 Tandem pilot, instructor Stef is a tandem pilot, skydiving instructor and AFF instructor. She is a true tandem professional and is passionate about showing our guests and students the world of skydiving. 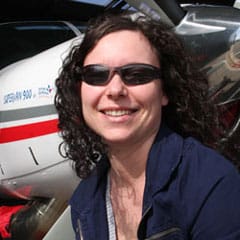 Reception, Organisation Alena works in the heart of TAKE OFF - in our reception, the "Manifest". She takes your bookings on the phone and processes the online bookings. She is also a master in organising the daily jumping business. 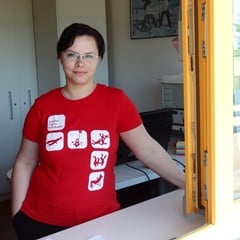 Reception, Organisation Bianca masters the bookings and the organisation of the daily jumping business. The hub of this is the Manifesto - our reception. 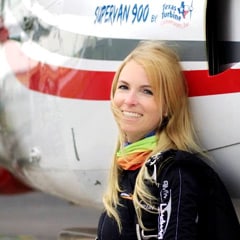 Reception, Organisation Diana is also a staff member at Manifest and supports us in processing bookings and organising the daily skydiving operations. She herself has already completed 120 skydives. 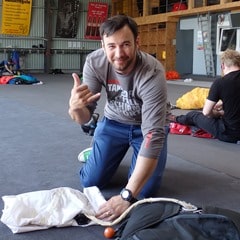 Packer Flavius helps to ensure that the parachute systems are properly packed. 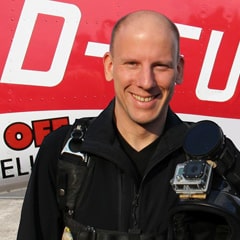 Instructor, video man Kurt is an enthusiastic skydiver and makes action videos with breathtaking insights into the sport of skydiving. 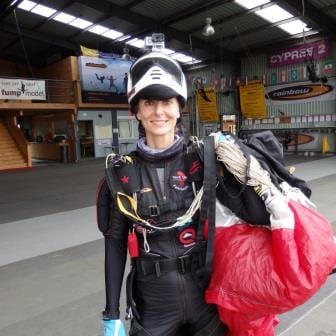 RW coach Caro is a top athlete for formation jumping. She holds a German championship title in 4-man RW and has contributed to several German records. 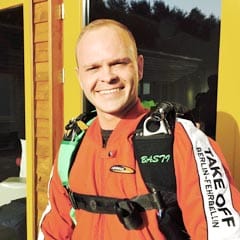 FreeFly Coach, Video Man Sebastian - nicknamed "Basti" - is the man for the beautiful moving pictures of the skydives. He is also a FreeFly Coach. 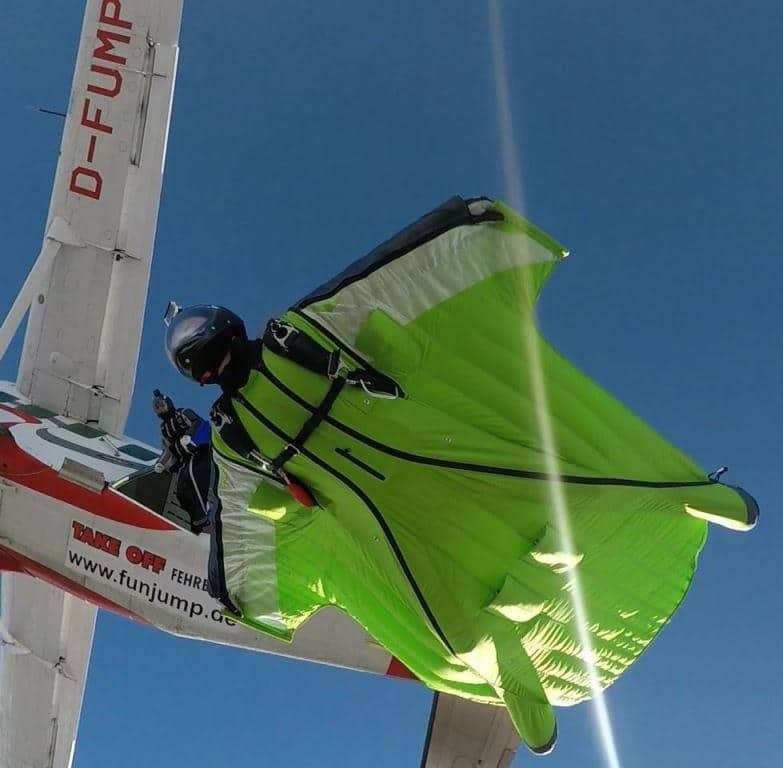 Wingsuit Specialist Buschi is a jump instructor as well as a DFV certified and qualified wingsuit instructor. 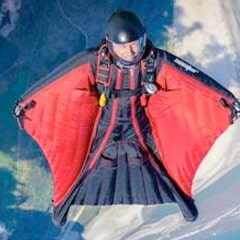 Wingsuit Specialist Stefan is a specialist in wingsuit flying. He is a DFV certified and qualified wingsuit instructor and is therefore allowed to teach other skydivers how to fly with a wingsuit. 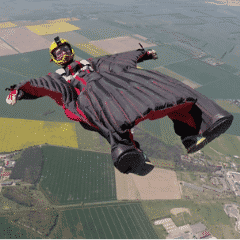 Wingsuit Specialist Jan is a skydiving instructor as well as a DFV certified and qualified wingsuit instructor. As a parachute supervisor, he is also authorised to pack reserve parachutes. 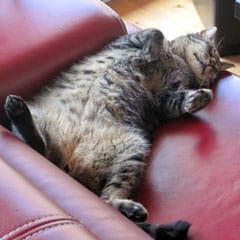 Mouse Population Controller Diego the cat likes to purr as he greets our parachute guests and enjoys being cuddled. When he's not relaxing on the sofa in the Manifesto, he's out hunting mice in the fields. So far, we have not been able to persuade him to go skydiving.

You have questions? Send us a message!